A Big One for Sparkling Wines

Kramer Vineyards harvest larger than ever before

With sparkling wines comprising 40 percent of their total production, Kramer Vineyards toasts the largest harvest in its 30-year history with a record-breaking offering of sparkling wine. To further celebrate, the family owned winery will offer 14 sparkling wine releases.

“We’ve always loved sparkling wines. They are extremely challenging to make because they’re wines of such precision,” said Winemaker Kim Kramer, who’s been producing sparkling wines since the early 2000s. “It’s rewarding to see the delight these wines bring to people’s faces and to see them come back for more.”
Dedicated to sharing the delight of its fizzy wines while quenching the thirst of a growing sparkling wine demographic, Kramer Vineyards opened a sparkling tasting room in Carlton in 2013 and soon started its own sparkling wine club. The winery has also been featured in many of Oregon’s sparkling wine events including Bubbles Fest.
To celebrate, Kramer Vineyards is releasing a new collection of traditional method sparkling wines from its estate vineyard in the Yamhill-Carlton AVA. These wines are all bottle fermented, and composed of Pinot Noir, Chardonnay, and/or Pinot Meunier. 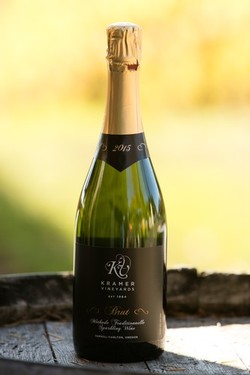 If you would like more information about this topic, please contact Kim Kramer at (503) 662-4545 or email at kim@kramervineyards.com.

Vintage 2017 opened with a severe winter followed by a long, rainy spring. With five months of overcast skies and very few sunbreaks, the vines were slow to start. We observed over 50% budbreak by April 28, a bit late for our vineyard. The canopy started filling in when the sun finally came out in late May. Summer weather fully arrived the third week of June, and with temperatures in the high 80s, bloom rapidly occurred during the fourth week. Conditions were ideal for this growth milestone, contributing to excellent fruit set—the best we have seen since the 2009 and 2014 vintages. Veraison started on August 7, hitting the 50% mark two weeks later.

With our fullest crop in years, and a warm and dry forecast, we were on track for a big harvest. 2017 had some catching up to do for heat units, and by early September our GDDs were even with 2016. This, combined with low disease pressure, and an anticipated late September/early October harvest contributed to our decision to do minimal cluster thinning. In these conditions, carrying a heavier crop load forces the vine to work harder, slowing down ripeness, resulting in more balance. 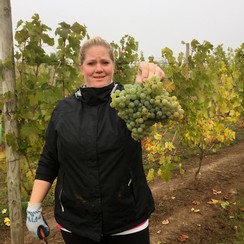 We started to notice a shift in flavor development after Labor Day Weekend, and began sampling the Pinot Noir, Pinot Meunier, and Chardonnay blocks for the sparkling harvest soon after. The sparkling harvest began on September 15, with the Pinot Meunier. The Pinot Noir and Chardonnay came in over the next several days. This was by far our largest sparkling yield, bringing in 10.3 tons from the estate, with an additional 9 tons from other sites. The increased crop load was due a combination of excellent conditions during bloom and fruit set, to our decision to thin minimally, and also due to heavier cluster weights. In a typical harvest, clusters from mature Pinot varieties will weigh `150 to 200 grams. In 2017, average cluster weights were closer to 300 grams, and some, as in the case of the Grüner Veltiner, tipped the scales at nearly two pounds! This trend would continue throughout much of the harvest. 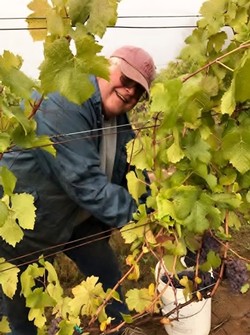 Much of the rest of late September and early October was dedicated to harvesting and pressing grapes for white wine production—Pinot Gris, Chardonnay, Gruner Veltliner, and Muller-Thurgau. Pinot Noir from warmer sites started coming in on October 9, with our estate fruit being harvested in mid-October. Before long, every fermentation vessel in the winery was full, and we had to purchase a few more tanks and vats to accommodate the extra fruit. Harvest concluded October 28, with the Carmine pick. By then, we were at full capacity—every tank, vat, barrel, and carboy was full. Overall, we brought in nearly 94 tons of grapes—20 more tons than our biggest year to date in 2014.

On the Crush Pad and in the Cellar 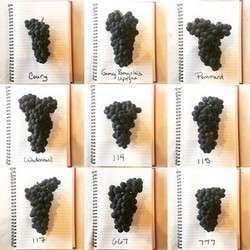 Once the fruit is picked, it is delivered to the crush pad for processing. For white and sparkling base wines, the grapes are sorted then pressed; for red and roses, the fruit is sorted and destemmed. This year, the fruit was in excellent condition, so most of the sorting required was to remove leaves and other non-grape material. The sound quality and overall ripeness of the Pinots led us to continue with whole cluster experimentation in higher percentages than ever before. We also expanded the number of clones of Pinot Noir we are working with to nine total. 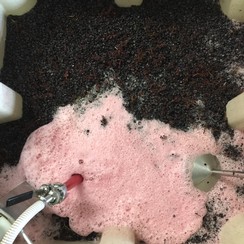 A combination of cool October nights and whole cluster fermentation extended maceration in the red ferments to an average of 30 days. We typically press at dryness, and that usually happens on a 10-14-day schedule when the fruit is all destemmed. With whole cluster ferments, sugars are trapped in the berries, limiting the sugars available to the yeast, prolonging fermentation. This meant that our fermentation management routine was extended by several weeks, and pushed our pressing dates further into November. Our last press was on the day before Thanksgiving, November 22. This is extraordinarily late compared to the last few years, when we were picked, pressed, and barreled down by mid-October.

For the white wines, fermentations were steady and healthy. Tank space is always a concern in years where yields are high, and in some cases, we elected to ferment in stainless or neutral barrels. In addition to barrel fermented Chardonnay, we also have Pinot Blanc, Pinot Gris, and Pinot Noir Blanc wintering over in barrels. These vessels will be stirred bimonthly through the spring, and either blended in with their tank counterpart to enhance mouthfeel and complexity, or be bottled on their own in the fall of 2018.

As we put another harvest behind us, the 2017s are wintering over in tanks and barrels. After the New Year, we’ll begin to taste the wines individually, and start to make blending decisions and form bottling plans. The first wines of the vintage will be available in a few months, some won’t be bottled until the spring of 2019. We are looking forward to what this record-setting harvest has in store.

Dosage in Our Sparkling Wines 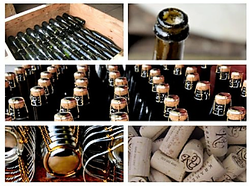 Dosage is a finishing syrup added to most champagnes and sparkling wines after the second fermentation in the bottle. Adding very small amounts of sugar can help to balance high acid wines, emphasize fruit, and improve texture. For one of the best explanations on this subject, see A Seasoning for Champagne, by Peter Liem.

How much dosage do we use?

In the cellar, the first introduction to our sparkling wines is often a few months after it's been bottled, to see how the second fizz-creating fermentation is coming along. Tasting a sparkling wine for the first time in this raw state, dry, and dancing on cells of suspended yeast, is always a thrill.

Once the fermentation is complete, we begin to assess the necessity of dosage, and prepare a range of wines with sugar levels up to 10 grams per liter. In our history of making sparkling wines, the dosage levels have ranged from 3 to 8 grams per liter. However, these preferences aren't always clear cut, and we often have a fondness for the crisp, tart, and very dry wines without dosage as well. 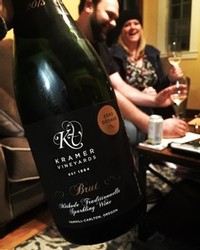 The low to zero dosage movement is a relatively recent trend, and more commonly found among grower-producers than big sparkling houses. While we certainly identify with the grower model, our interest in the style is rooted the idea that with a great fruit source, followed by good fermentation and cellar practices, that perhaps the best course of action is to take none, and let the wine speak for itself.

Vintage vs Nonvintage in Sparkling Wines

Vintage describes the year of the grape harvest, and in the US, wines with a vintage year on the label indicate that 95% of the grapes were from that year. By contrast, nonvintage wines are blends of wines from grapes that were harvested from two or more years. Seventy to eighty percent of Champagne is nonvintage, with blending specialists carefully combining dozens, sometimes hundreds, of base wines together to reflect a house style, the signature of the producer. Vintage wines are rarer, and it is common for a sparkling house to produce vintage wines in years that are deemed to be of superior quality.

In addition to these details, one distinguishing feature of note is that the base wines for the Brut Reserve were fermented and aged in neutral French oak barrels. This treatment of the base wine results in more richness, palate weight, and structure than in stainless.

So, while these nonvintage wines are wines of place, the 2015 vintage Brut is a wine of both place and time. 2015 was warm and early, with higher than average yields. The fruit was remarkably balanced however, with excellent structure. What distinguishes this vintage for the Brut especially is the amount of Pinot Meunier in the blend, 22 percent, up from just 15 percent in 2014. We are still learning what the Pinot Meunier contributes to the wine, but one of the early observations is the enhanced midpalate presence and fruity aromas. The fruit for this wine is sourced from blocks dedicated to our sparkling program, and the blend is determined by the yields at harvest.

With base wines of different vintages, blends, and dosage, these wines seem quite different. But, how does this translate in the glass? Early observations are that the nonvintage wines boast a finer, more delicate mousse, with pronounced yeastiness and an increased emphasis on tree fruit flavors. By contrast, the vintage wines are incredibly fresh and light, with a fine, yet plentiful bead, showing much more minerality and citrus notes. The tone and texture of these young wines will change as they evolve in the bottle, and it is always exciting to track their progress.